Glenn Danzig was due to hit the stage with his 25th Anniversary set after a full hour of GWAR dousing the crowd in fake blood Friday night…  Lead vocals, Oderus Urung of GWAR using his notable humor and colorful fluids to cause more of a Riot this year.  Women and men were thrown fierce at the sound of “sick of you” from Gwar’s second album, Scumdogs of the Universe.. The show was most entertaining, dark and heavy in the nice shade of red.

After an hour of stage clean up, the fest was begging for Danzig to come play.  Chicago fans already have been waiting due to the Congress Theater closing and the Danzig set was rescheduled almost a month later. Along the side of Glenn Danzig was Tommy Victor, (Lead guitar), Steve Zing (Bass) , and Johnny Kelly (Drums).  As time passed with quick sound checks, groups were chanting for the show. Glenn finally came out ready to rip into the set with kicking speakers and all. I would say that most, if not all, was satisfied with the song list that included, “Twist of Cain”, “Her black wings”, “How The Gods Kill” then slowing it down with “Blood and tears”.  Much like the last tour he brought out Doyle, (Former Misfits) for some horror punk mischief.  The moment Doyle came stomping, the pits were so tight and ruff to take a single breath. Giving us, “Death comes ripping”, “Vampira” and other favorites like, “Astro Zombies”.  Throughout the whole night fans were screaming every word to every song, leading Glenn to give us our choice of wanting, “Skulls”.

Being a fan myself, I have to say that this show was nothing but wicked.  I couldn’t bear leave those pits, no matter the pain.  It was one hell of a night!  Even though the request for a formal interview with Doyle fell short, I was still able to get in touch and have a chance to meet him and have some good laughs!! As for the rest of the crew, they were just as kind and welcoming to myself, and friends of mine.  One more night… Never forgotten. 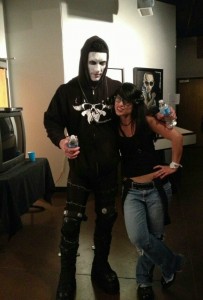